Colourful Basement for the Kids AND Adults

Do you want to see how we transformed this basement into a space that the kids aren’t taking over anymore (but still really lends itself well to the kids)?

As you can see, this basement has some challenges. First of all, it feels dark. Second of all, we have this carpet in here that has a really strong pink undertone. You can’t necessarily tell from this image, but keep that in mind as we go forward, it has this really strong pink undertone in it, and it was really apparent when we were in the space because the walls had this yellowish-green undertone to it. And when we put a yellow undertone next to a pink undertone, they tend to clash and bring up that pink and bring up that yellow, and not play harmoniously with each other.

We knew for sure that the flooring was going to stay, given the budget of the project, and just given that the clients wanted that warmth under foot, and that the carpet was in really good shape. So how do we transform it to bring more light into the space? As you can see, they were in the middle of organizing and getting rid of some of the toys, but this was very much a kids space. There was no room here for adults.

The other challenge is that we have this corner fireplace, and we played with maybe moving it down the wall. The clients were pretty convinced that they need to do that, but I wanted to show them what it could look like without moving that fireplace because moving a corner fireplace to a centre of another wall, when it is gas, can get really expensive, and would have taken up a ton of their budget.

And this was a giant room. This is the size of four normal rooms put together. So because there was no furniture down here for us to use, and they wanted some cabinetry and things like that, all of those things were going to eat up a lot of the budget so we had to get creative.

So, let’s take a dive into the concept. The colour story on this was super fun. They love colour so you just know that this was a dream of mine because I also love colour. They wanted it to be fun, family-friendly, they wanted it to really speak to the kids, and it still felt like a fun space, but it felt like a family space that they could hang out in all the time. The clients’ favourite colour and the girls’ favourite colour (there are two twin girls as well who use this space) was teal. They love this turquoise-teal colour.

And they knew that if they were to do it on their own, that the whole room would just be all teal so I wanted to pull in a lot of other colours to really make it a fun space. So we brought in this beautiful cobalt blue, and then also brought in some orange, some black, some pinks, along with the greys, and the whites, and the silvers, to really tone it down, make it feel super contemporary, but super fun at the same time.

The layout of the room, you can see that we divided into zones. This zone, as you walk in this doorway, the first thing that you see is the TV wall and this beautiful cobalt sofa. By doing an L-shaped sectional with a console on the back, we were able to split this zone to be the TV/movie/hangout zone. We pop that off with some orange chairs here and really define this space by the built-ins around the TV and also by the furniture arrangement itself. And then, over by the fireplace, we decided to paint the fireplace, you’ll see that in another slide here. And also, to create kind of a game zone. The family loves to play board games. What family doesn’t? I know Kyle and I love playing board games all the time, so putting this round table here was sort of this is for when the adults come over, or they have another family over here. The kids could be at the table while the adults were over here conversing.

And then, back here we have a work & play zone for the kids. We did two desks back- to-back, and I think we ended up changing that as we were discussing to one bigger, longer table even, so that the kids could have even more kids down there once they’re able to. And that gave them enough space too. If they have a Lego project, they can leave the Lego project out, but still have room to do crafts. Each of the girls then had their own space, which was also really important. This was where we popped in a little bit of that teal and we’ll see a little bit more of that colour coming up.

And then, this area over here, I called it the chill zone. The chill zone is really defined by this bar area cabinetry, a few bean bag chairs for the kids. This is for them to read books, it’s for them to grab beverages and snacks, and all of that kind of good stuff.

As we go in here, we can see, this is the view as you walk into the space. Now, there was a little bit of a fight as there normally is with husband and wife. Wife doesn’t want to go too big on the TV because they don’t want to just see the TV, husband wants to go as big as they can with the TV because that’s what husbands want. So what we did was, we did a really fun black wallpaper here to sort of camouflage the TV, so that we could go big but it wasn’t going to be this in your face black. And it really balances quite nicely then with the charcoal that we did on the fireplace, which helped to really make that a separate focal point in the room. And it was a really nice way to create this differentiation of the different zones.

So you can see, we had this beautiful cabinetry built. And this was built by Oak Barrel, who is one of our favourite cabinetry makers. They do beautiful, beautiful cabinets. And look at this, we brought in some of that teal. So this was done, I will have some real-life pictures for you guys at some point, whenever we can get out there. I know they’re waiting on a couple items, but as soon as I can get up there, I will show that to you.

Over here, this is more on the furniture zone. Just due to budget, we ended up not doing the Ottomans right now, that’s something that they’ll do a little bit later. We thought we could do a great gallery wall for family photos over here, and then bringing in some of the colourful pillows really helps to disperse those colours around the space. And that’s super important.

A lot of people go to a pop of colour, meaning that they put it on one item in the room and then it doesn’t feel right. It just feels off. It doesn’t look good and it can look a little bit cheap when we only use the colour once in the room. We really need to repeat colours multiple times throughout the space to make it make sense.

Here is that beautiful cabinetry with nice, big drawers that we did. And with some towers on either side to put their board games, to put blankets, to put toys, to put movies, all of these different things.

As we move into the game zone, we saw that we repeated that cobalt blue into the chairs here, and did a beautiful wood table. The clients do love a little bit of that wood industrial look, but then they also like more of a contemporary, colourful look, so we wanted to give them a little mixture of both so that their personalities were really showcased.

Along the back wall, the family did a project with some dot murals and that’s really fun, it looks really good, with some Ikea cabinets to give them lots and lots of storage space for all of those toys that we saw in the before photo. And then, you can see my rendering, they ended up buying that exact picture for here.

I really want to show you the snack zone. We popped in a little bit more of that orange, which looks fantastic against the turquoise that we brought in again here for the bar area, for them to put snacks and things like that. And we did it a little off-centre, and the reason for that is because of plugs, because of the bulkhead, there were a lot of different challenges in here.

I’m super excited to share with the final result when this comes to fruition! I know that they have been hanging out here for months and that they’re loving it. I love doing kids’ spaces. I love doing colour and things like that. And I’m so happy that these clients finally get to enjoy this big, beautiful basement of theirs.

Here are a few sneak peaks: 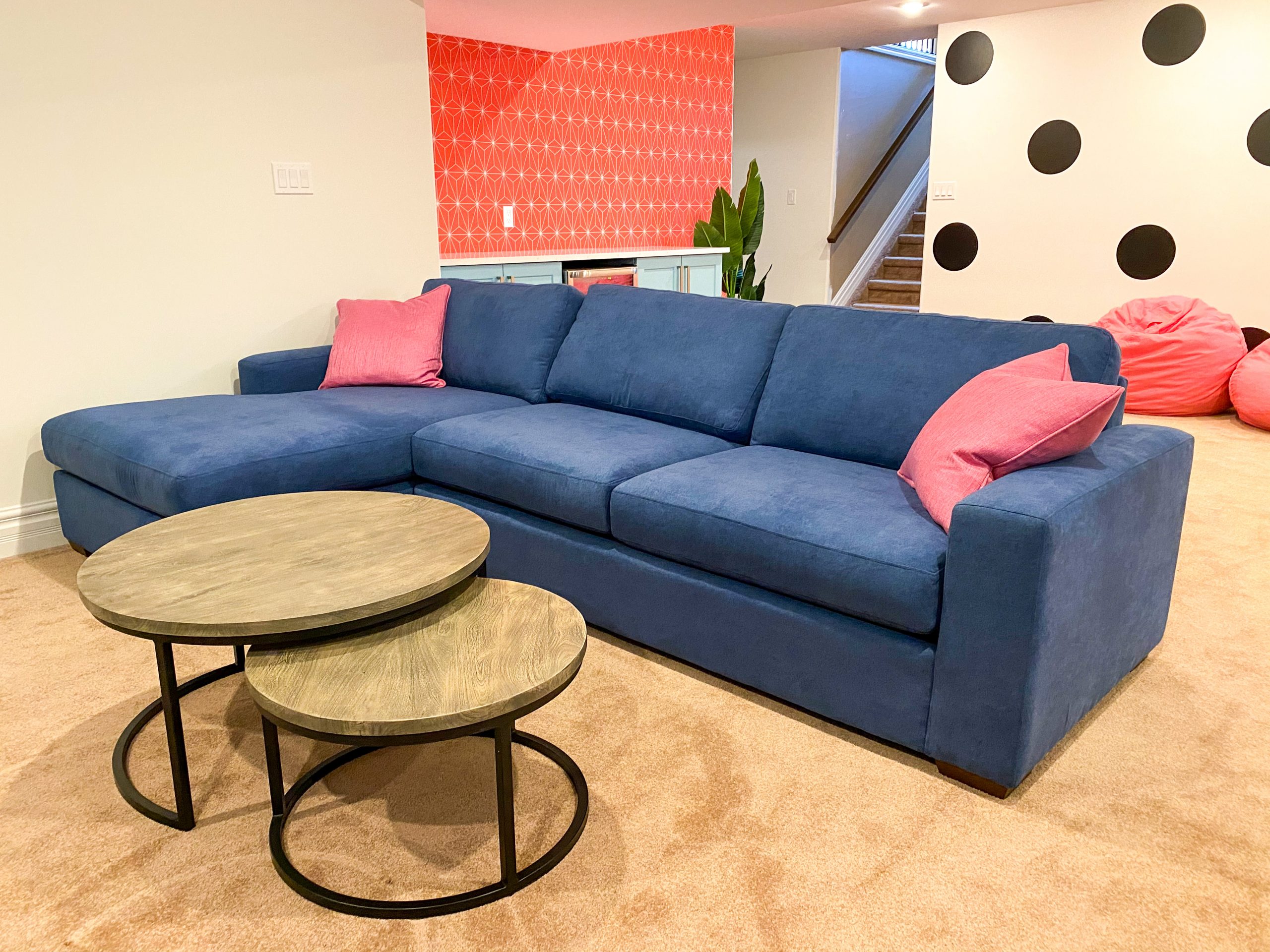 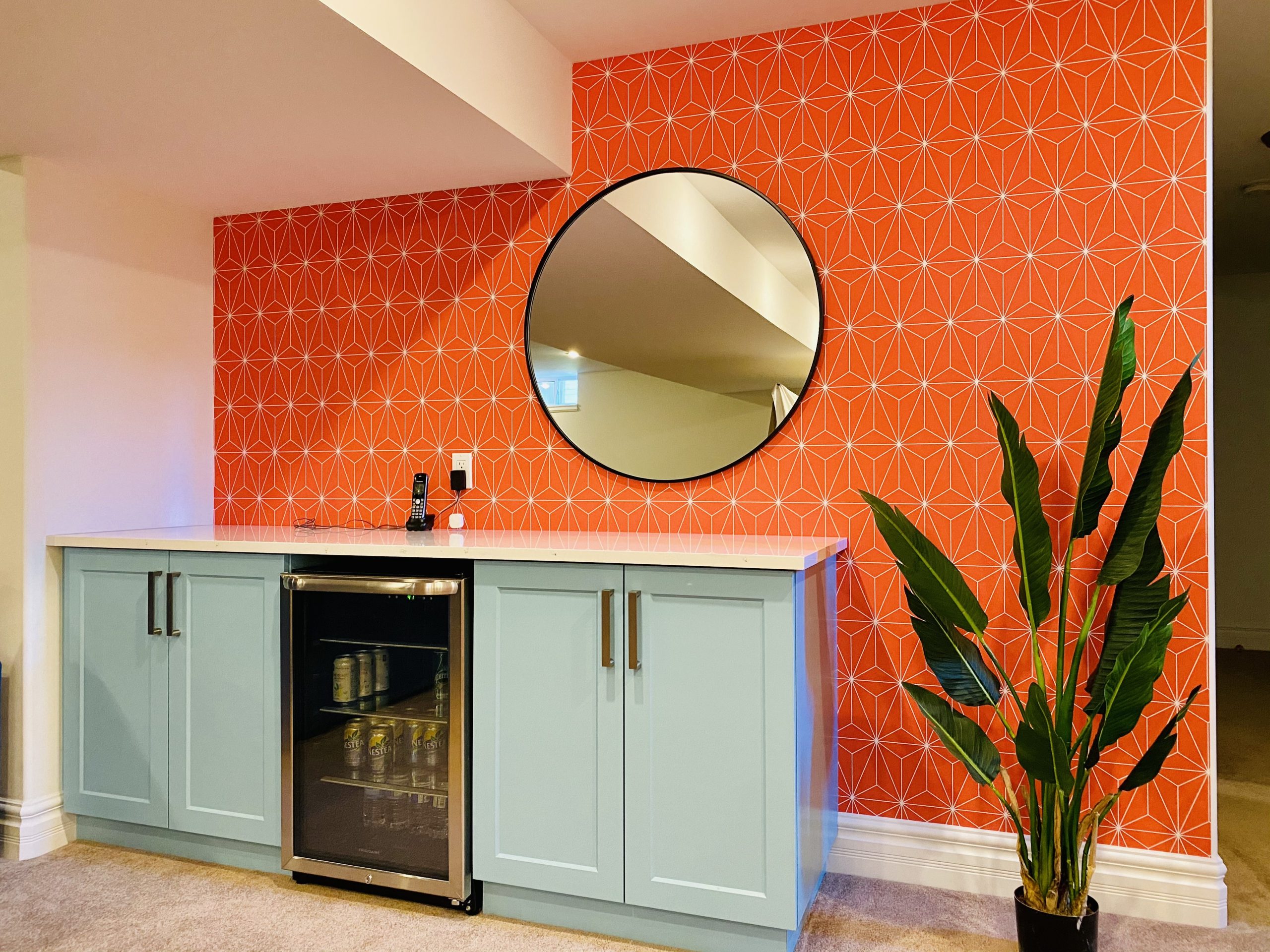 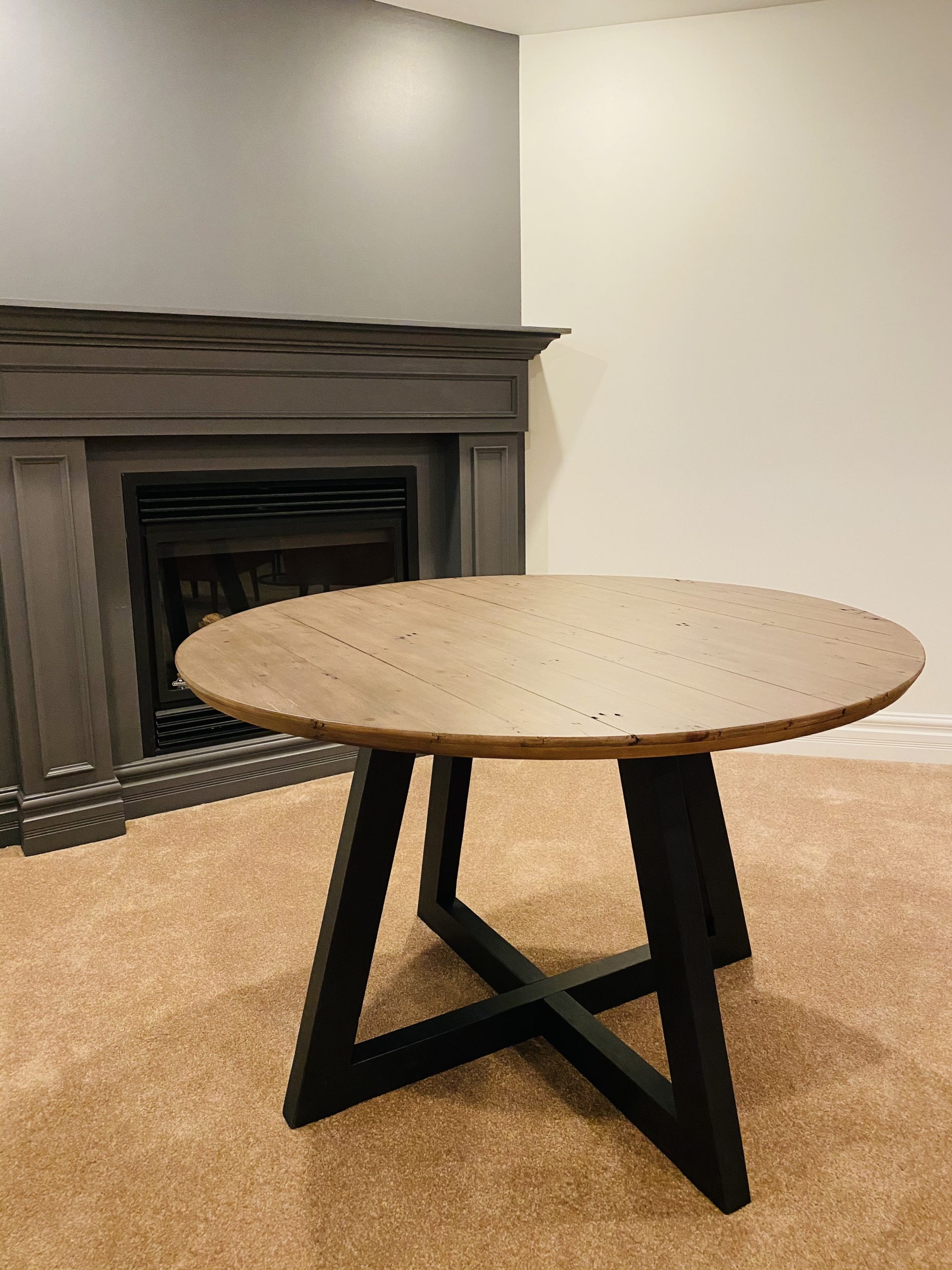 Get Your Free Guide To Hiring an Interior Designer

Where should we send your guide?

The guide will be in your inbox within 5 minutes! If you don't see it, check your spam and promotions folders.